With anticipation building ahead of its October opening in downtown Salt Lake City’s The Gateway cultural district, Flanker Kitchen + Sporting Club — a dining, drinking, and entertainment destination conceived by Carver Road Hospitality — is giving the world its first glimpse at a menu of elevated American fare developed by renowned culinary director Jeannie Glass. Rising to meet the challenge in a city that’s fast-becoming a must-taste destination for foodies, Glass has conceived a selection of dishes for all occasions and palettes, to be served at Flanker’s centerpiece Restaurant, as well as its Sporting Club and The Parlor cocktail lounge. 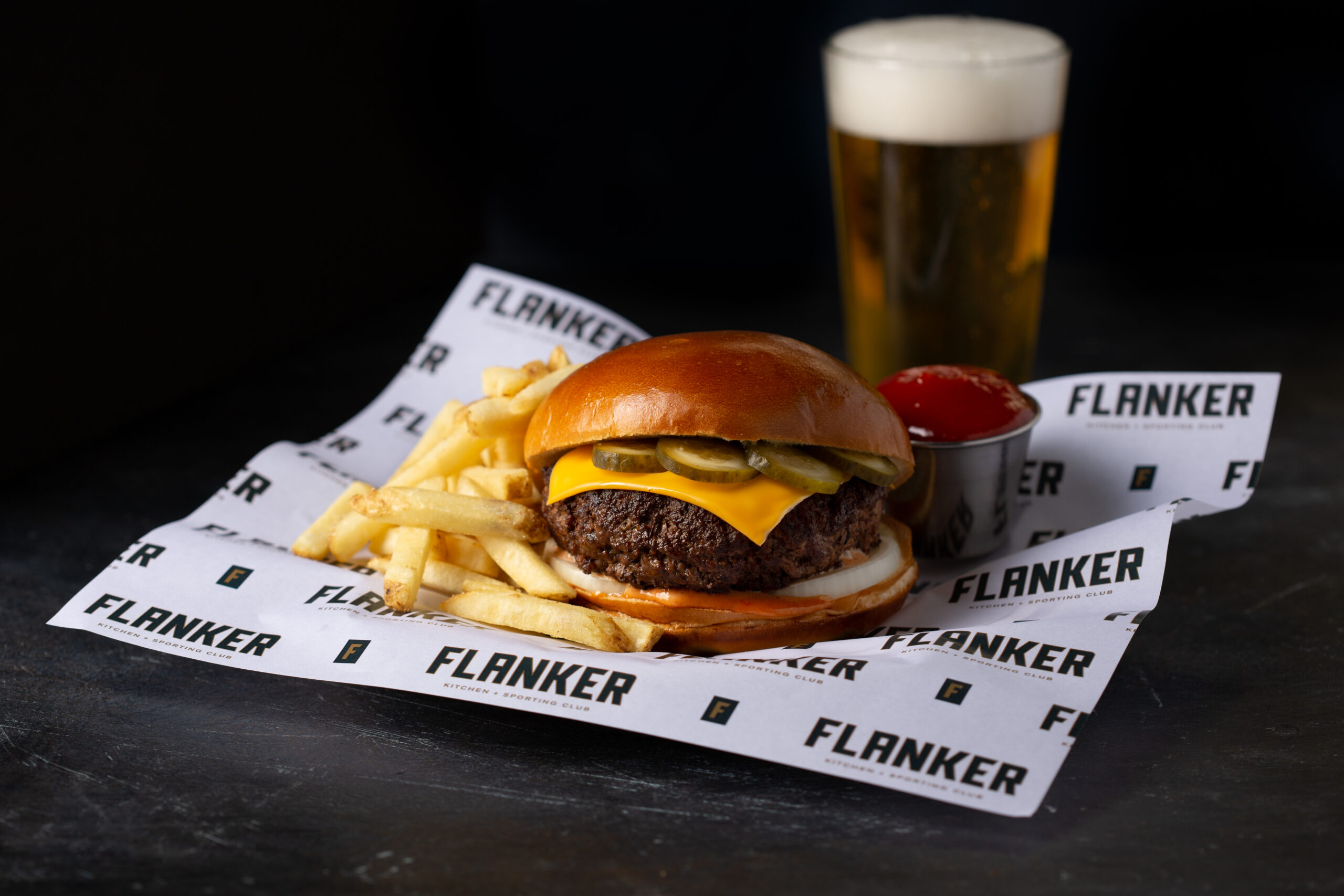 Among the Restaurant’s mouth-watering offerings for meat lovers: an 8 oz. prime Filet of Beef and 16 oz. prime New York Strip, both with mashed potatoes and chimichurri; and the Backyard Burger, a griddled 8 oz. Black Angus patty with American cheese, served on a brioche bun and topped with pickles, sweet onions, and comeback sauce; and a seared and chilled rare filet of Beef Tataki with soy-ginger sauce. For seafood fans, Flanker will serve a skillet of Lobster Mac ‘N Cheese featuring four cheeses, panko, and cavatappi pasta surrounding a lobster tail; a pan-seared Crab Cake Sandwich on a brioche bun with old bay remoulade and butter lettuce; a Center Cut Salmon Filet with sweet chili glaze and sesame broccolini; Popcorn Rock Shrimp, served salt and pepper style with shishitos and cilantro aioli; and Lobster Fritters with fresh corn and Old Bay remoulade. The restaurant will also feature a selection of salads and bowls, as well as handheld dishes, including Hot Fried Chicken with maple bacon buffalo sauce and Brisket Tacos served on flour tortillas.

While the dining menu delights during the week, Flanker Kitchen + Sporting Club will become a brunch lover’s destination every Saturday and Sunday in The Restaurant and The Sporting Club. Saturday’s brunch will feature the week’s biggest games in a fan-friendly atmosphere while the Sunday Champagne Brunch will be a more lively party atmosphere complete with a DJ spinning all day in The Sporting Club and games playing on its 400-square-feet of LED screens.

Glass was enlisted to develop the menu for Flanker Kitchen + Sporting Club following her successful tenure as Executive Culinary Director of Chicago-based restaurant group Hogsalt. She is well known for her contributions to Las Vegas’ dining scene as Executive Chef of Bavette’s Steakhouse and Bar at Park MGM, Estiatorio Milos at The Cosmopolitan of Las Vegas, and the Bardot Brasserie, Five50 Pizza Bar, and Sage restaurants at ARIA; and Glass has also served as a Master Cook under “Chef of the Century” Joël Robuchon.

“A multi-concept destination demands a multi-tiered approach to the menu, and from the beginning we wanted Flanker Kitchen + Sporting Club to appeal to a range of guests, from those craving classic comfort food to those with adventurous tastes,” Glass explains. “It’s a delight to design a menu from the ground up with dishes that can be shared and enjoyed whether you are just stopping by for dinner with friends or settling in for a long evening of fun and games. I’m confident that our thoughtful and learned approach to this menu will make Flanker a must-taste experience among the city’s wonderfully diverse collection of restaurants.”

Located on the second floor above Olympic Legacy Plaza and across from Vivint Arena, the 17,500-square-foot Flanker Kitchen + Sporting Club is a dining, drinking, and entertainment complex featuring the Restaurant, three uniquely-designed bars, The Sporting Club for gameday viewing parties and nighttime socializing, private karaoke and golf simulator rooms, and The Parlor cocktail lounge.

The Restaurant will be open Monday through Friday nights beginning at 5 p.m. and Saturdays and Sundays beginning at 11 a.m. For additional information and to follow Flanker, visit linktr.ee/flankerslc.com.